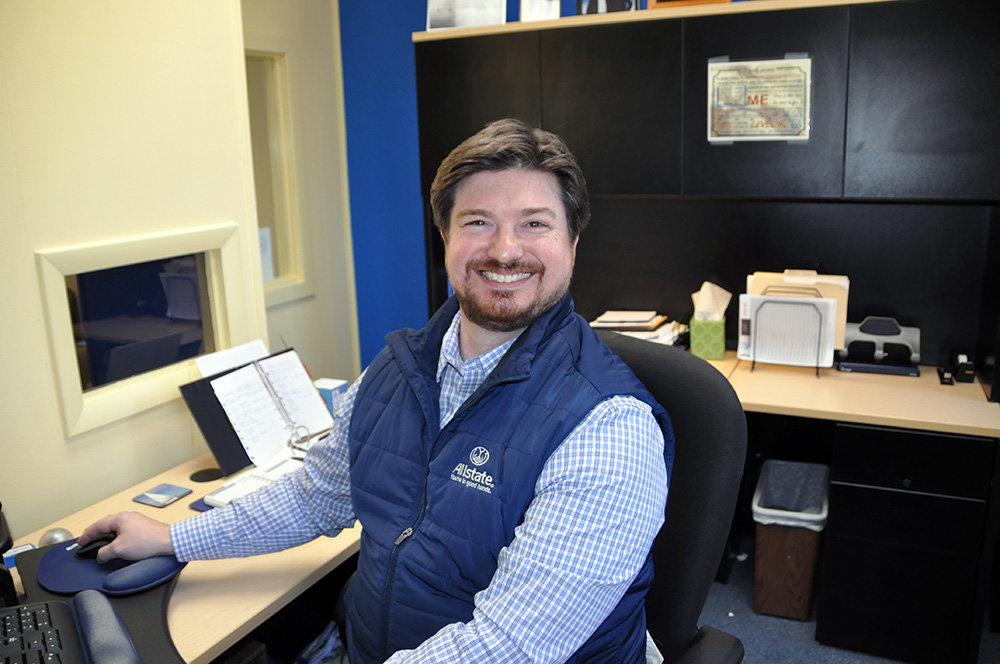 All roads lead to Allstate for Alex Schwab, but first he had to take the road less traveled.

Schwab’s grandfather began his career with Allstate after World War II, when it was still affiliated with Sears. Some 30 years later, he recruited his son-in-law and Schwab’s father, Kent Schwab, who would expand the business to several locations in the Baltimore area.

Though he always had a hunch he’d follow suit, Schwab’s a-ha moment came while working a retail job on the other side of the globe, during a gap year after college in New Zealand.

“One day, I’m in the stock room and my manager says, ‘There’s three men outside, and they’re asking for the American,’ and I’m like, ‘What’d I do?’” Schwab recounted.

It turns out, what he had done was provide excellent advice to these customers’ friends, outfitting them for their backpacking adventure. His reputation had brought these new clients to the store specifically for his expertise.

“All I did was talk about my weekends,” Schwab said. “When I wasn’t selling backpacking gear, I was actually on the mountain myself.”

That interaction was the catalyst for the phone call that would launch him into the family business.

“I called my dad and said, ‘Just so you know, I am coming home in six months, I’m not going to be an expat forever, and please have an open desk when I get home. I want to give Allstate a try. I’d be crazy not to try this,’” Schwab said.

In February 2004, he started at his dad’s agency, and when he struggled to help a client on his first day, he watched in awe at his dad’s response.

“He came up to her, and he knew everything about her,” Schwab recalled.

When the client learned he was Kent Schwab’s son, she asked if he promised to take as good of care of her as his father had.

Schwab rebounded from that first day. In July 2019, he purchased the agency from his father and continues to serve more than 3,000 households.

The insurance industry, like many others, has changed drastically in the nearly two decades since Schwab joined the business, with a good deal of change happening in the last two years due to the pandemic. For Schwab, that meant closing his Odenton, Maryland, office and settling into his basement for longer than anyone could have guessed back in March 2020.

When the dust settled, Schwab found the perfect space in Severna Park, where he and his wife live and their children attend school. His new office, which opened in September of last year, is located on Benfield Road across from the Kensington community where his grandmother once lived, another move that seemed influenced by fate.

What has not changed over the years is Schwab’s desire to help people.

“The majority of what I do for years has been over the telephone,” Schwab said. “I do love it, though, when people actually come in and we have conversations because that’s where I can do the best job for them."

And if you do end up across the table from him, he’s probably going to make sure you’ve got a life insurance policy as that’s tops on his list of products that shouldn’t be skipped over.

“That is the most important product that anybody and everybody should have,” Schwab said, adding that an umbrella policy to supplement your homeowners and auto coverage comes in a close second.

As we get settled into this new year, Schwab recommends talking with an insurance agent about your current coverage and minding any gaps.

Nearly 20 years into his career with Allstate, Schwab remembers the advice his late grandfather gave him before he went to work his first day.

“He said, ‘I’m going to give you a piece of advice, and if you listen to me, you will have a very long, very successful career. Are you ready? Don’t ever forget that you have a job because you have clients. If you never forget that, you can’t fail,’” Schwab said.