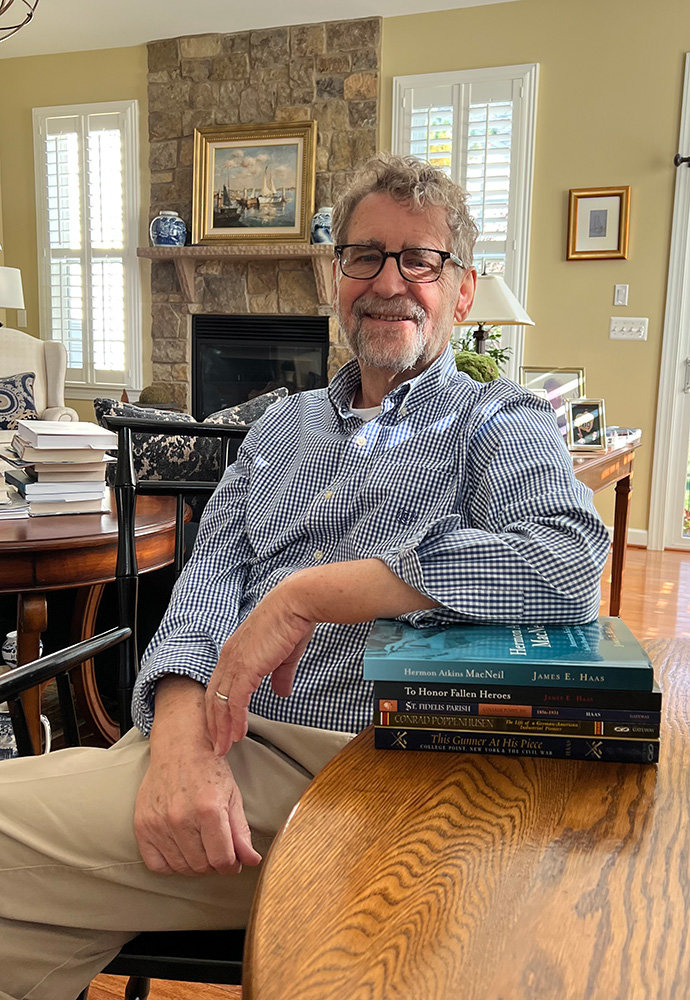 James Haas left his College Point neighborhood in the New York City borough of Queens in 1965, but a big part of his heart stayed behind in New York. The Severna Park resident of more than 40 years channeled his hometown’s past with the publishing of his fifth book, “Hermon Atkins MacNeil: American Sculptor in the Broad, Bright Daylight,” in November.

The subject of his latest work of nonfiction was also a resident of College Point from 1902 until his death in 1947. During those years, MacNeil produced more than 250 pieces and was one of the most accomplished and highly respected sculptors of his era. Haas’ book is a detailed manuscript filled with more than 200 photos and images of the master’s art and chronicles of his life and career.

“Every day, in cities and towns across America, people pass by monuments, reliefs on buildings, or even glance at the face of a coin and never consider the human beings that brought them into existence, the discussions about the symbolism of the piece or even its placement,” Haas said. “This book brings all of this to life, including details of the political and historical environment of the era, the accolades and the rejections.”

While conducting research for a previous book that chronicled how a village in New York City experienced World War I, Haas was alerted to MacNeil and his community involvement.

“Because he had created the 1916 U.S. quarter, he was already someone generally familiar to College Pointers, so when editing the World War I book, I pondered the MacNeil bio as my next subject,” Haas said.

Haas thought the MacNeil research would be something for local consumption, but when he learned that no one had previously penned a MacNeil biography, Haas knew what his next project would be.

MacNeil journeyed from Massachusetts to study in various stateside locations before heading to Europe. He then landed in the southwestern U.S. prior to settling in Queens. Haas’ book includes intimate stories of MacNeil’s personal life as it chronicles the development of the artist and evolution of his art career.

After attending Buffalo Bill’s Wild West show at the 1893 Chicago World’s Fair, MacNeil became fascinated with the culture, rituals and lives of Native Americans. He had a prolific career capturing the eyes and faces of significant figures of the Sioux, Navajo, Moqui and Hopi Indian tribes in sculpture.

MacNeil’s largest works include three relief panels installed above the Palace of Fine Arts, now known as the St. Louis Art Museum, in 1904. In the early ‘30s, he worked on “Justice: The Guardian of Liberty,” a towering relief on the eastern side of the U.S. Supreme Court building.

As an homage to his hometown, Haas donated all his research, including previously undocumented photographs and articles dating back more than 140 years, to the Poppenhusen Institute, a cultural center and museum in College Point.

It’s not just MacNeil whom Haas has gained knowledge about during the composing of his latest work.

“I’ve learned a great deal about sculpture and the development of art throughout the decades,” Haas said.

Haas said since he’s written about College Point, the Civil War and World War I, he plans to focus on World War II for his next project.

Haas has compiled a list of more than 1,500 men and women from his hometown who served in the U.S. military during World War II. After the promotion of his MacNeil book, Haas will start work on his next self-published book.