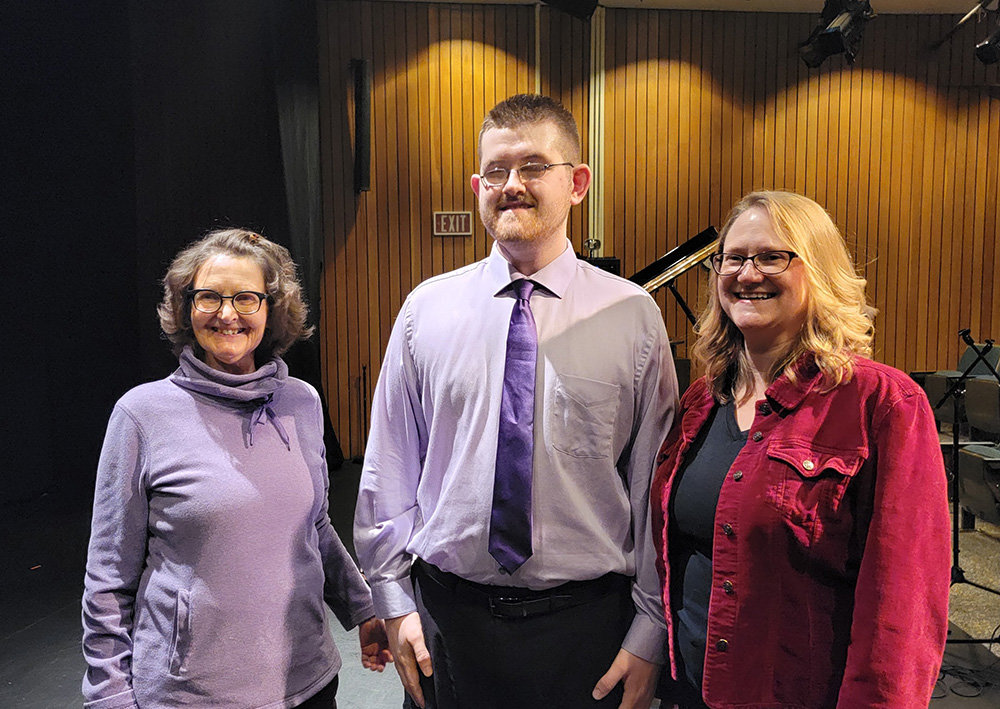 Tyler Shallue, a legally blind student with autism at Anne Arundel Community College, wants the world to know that nothing is impossible.

Tyler performed a piano recital in December at the community college with compositions by Johann Sebastian Bach, Claude Debussy and Ludwig van Beethoven. The recital was livestreamed and recorded to assist the Library of Congress, custodian of the world’s largest collection of Braille music, in spreading awareness of the availability of Braille scores to help other blind or visually impaired musicians across the globe.

“I feel very grateful to have been given these talents, even though it’s a challenge sometimes,” said Tyler, a Severna Park resident. “If my music changes people’s lives, it will inspire me to keep going.”

Tyler has been working with Carolyn Sonnen, a board-certified music therapist and musician, since he was five years old after his parents recognized his interest in music.

“We started with creative exploration through music and sound, instruments,” Sonnen said. “Soon the question was, ‘Can he learn piano?’ I knew he could pick up music. He picks up music by ear and has perfect pitch.”

In 2009, Tyler began studying piano as therapy, and he commenced formal lessons in 2015. He was learning Braille music and longer compositions by seventh grade, advancing his repertoire in high school.

“He’s always been talented musically, which is why we got him involved with music therapy,” said Tyler’s mother, Lisa. “He didn’t communicate as well when younger. Music was a way to communicate.”

Sonnen said music is not foreign to people who are blind or visually impaired, citing Stevie Wonder, Ray Charles, Jose Feliciano and Andrea Bocelli as examples.

“Music is another area of emotional expression; being immersed in that music expands the emotional palate,” Sonnen said. “Music is more than just, ‘Well, isn’t it great he did that?’ Music touches an inner mechanism that moves and changes [Tyler] and us.”

As Tyler’s talent progressed, Sonnen contacted the Library of Congress for Braille music scores, and he began learning complex compositions. Once at Anne Arundel Community College, Sonnen contacted her friend, Diane Kinsley, who is an accomplished musician and piano instructor at the community college and asked her to be Tyler’s piano teacher.

When the idea for a recital came from the Library of Congress requesting a video of Tyler performing to help the institution, Sonnen and Kingsley knew he was ready. A recital date at Anne Arundel Community College was set. Music for the 20-minute performance was selected, and Tyler began the complex process of learning the notes and scores until memorized.

“Tyler has been working diligently on the music for many months, practicing five or six days a week,” Kinsley said. “He learns the music with one hand while the other hand plays the notes. I play the music for him, and he plays it back.”

“I think he’s ready to take on even bigger chords and explore Rachmaninoff,” Kingsley said. “Tyler doesn’t back off from a challenge.”

Tyler’s parents said they couldn’t be prouder of their youngest child.

“When he was young, I wondered if he would graduate high school,” Lisa Shallue said. “Now, I wonder what he will be doing in 10 years.”

Tyler aims to earn a degree that will enable him to pursue something related to emergency preparedness to complement his passion to keep people safe, along with his ambitions to promote Braille music to visually impaired and blind people.

“He has a genuine appreciation for what this has done for him, and he wants others to play,” Sonnen said. “There are great things coming for him, whatever it is.”