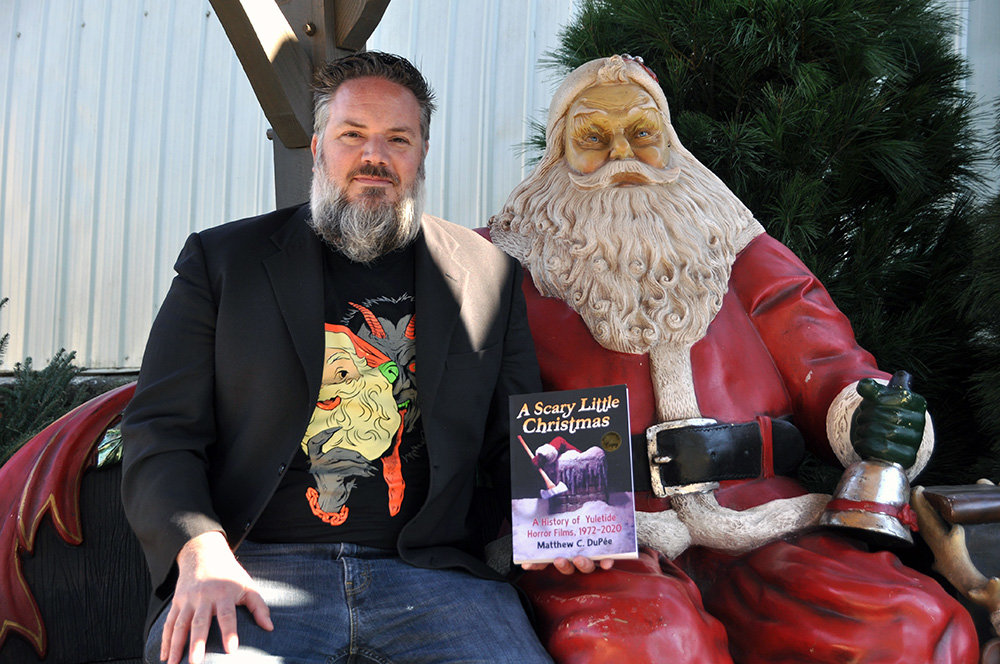 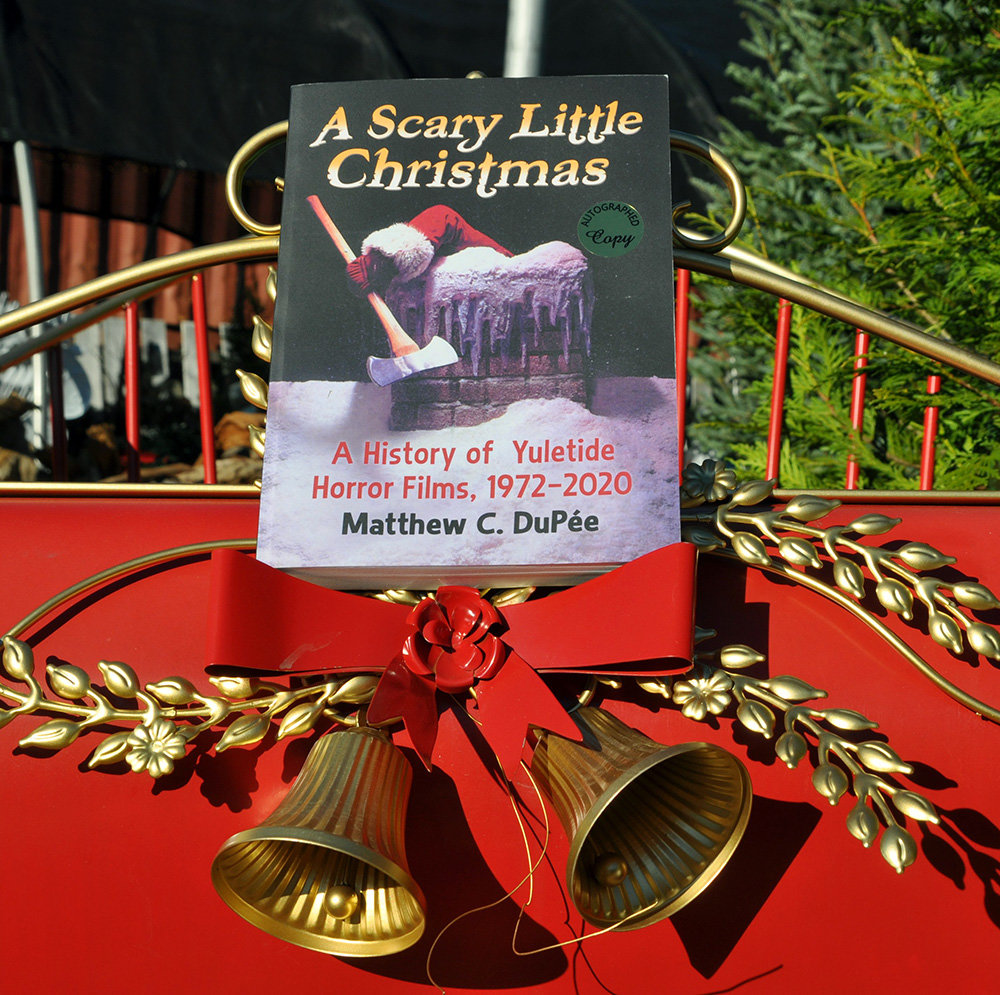 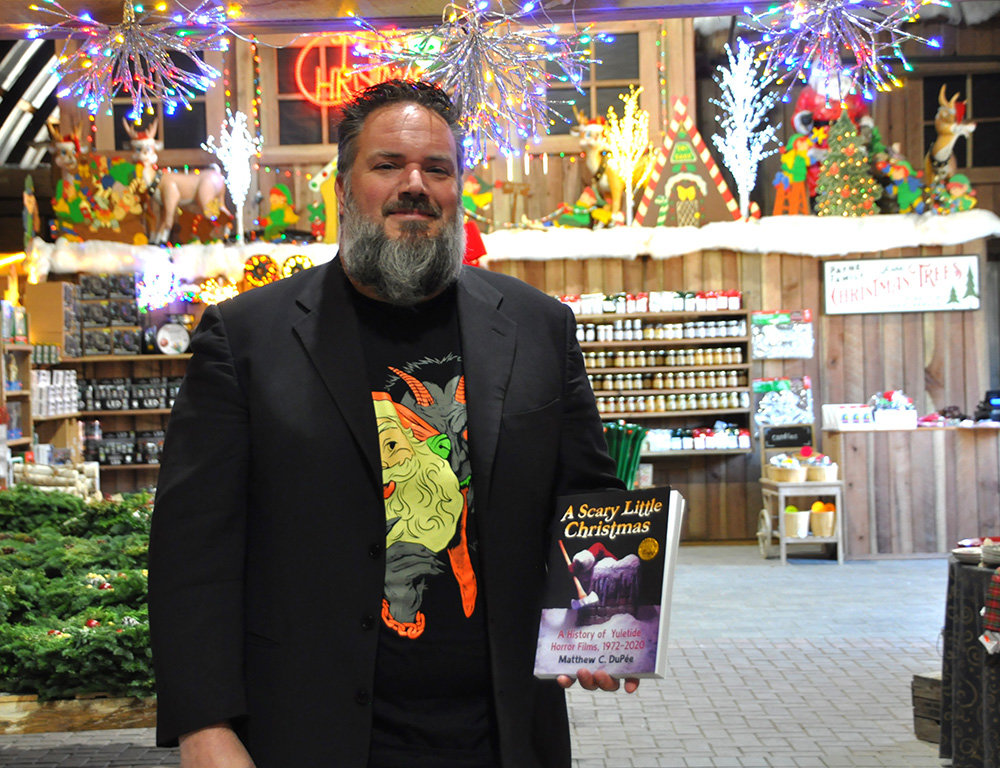 Matthew C. DuPée has a holiday tradition that he enjoys with his wife and kids every Christmas Eve. They gather around and watch the 2018 film “Santa Jaws,” in which a killer shark sporting a Santa hat terrorizes victims with a pole resembling a candy cane sticking out of its head.

“Taking a peek behind the curtain of the darker side of the holidays can be a lot of fun too,” DuPée said.

The Philadelphia native and now Millersville resident has published a book that serves as a guide to holiday horror films. DuPée’s “A Scary Little Christmas: A History of Yuletide Horror Films, 1972-2020” was published earlier this year by McFarland.

The 360-page book is broken up into 10 chapters and covers 225 films with themes such as killer Christmas trees, psycho Santas, homicidal holidays and intergalactic Christmas mayhem.

DuPée said his book is a type that he’s always wanted to read himself as a fan. His work draws information from not just watching countless hours of holiday horror films, but he also spoke to more than 100 filmmakers and actors, many of whom have been out of the industry for decades, during his research.

“I was super grateful that they kind of came out of their retirement to talk about their experiences,” DuPée said.

With a history of co-authoring academic and more serious subject matter as a Department of Navy civilian in Afghanistan, DuPée decided to take on a project that was personal to him.

“This was the first time I thought, ‘Let me write something that I want to write for myself.’”

With that thought in December 2018, DuPée stopped working on his article about illegal mining in Venezuela and turned his attention to his favorite cinema subgenre, Christmas horror. For two years, he watched films, conducted interviews and research, and put his pen to paper.

“I wrote a lot of this during the pandemic, so a lot of it was therapeutic in a way, especially at the beginning when it was really kind of frightening, everything shutting down,” DuPée said.

One of DuPée’s biggest surprises during his research was the fact that about 90 percent of the filmmakers he interviewed cited the commercially successful 1984 film “Gremlins” as their biggest inspiration to make a Christmas horror film.

“‘Gremlins’ is billed as a family film, but if you really look at it, it’s a pretty dark horror film,” DuPée said.

That movie came out in a period that was also influential to DuPée. With the home video market coming on, the young DuPée had access to more horror films. It was an uncle who first exposed him to Universal Monster Classics and his older brother expanded his viewing from there.

Before too long, his passion for horror led him to film school at the Pittsburgh-based Point Park University. DuPée spent a couple of years in the film industry before the events of 9/11 transpired and DuPée felt a calling to support the defense community.

DuPée is excited about the future of holiday horror films with new releases constantly being offered and more young people discovering Christmas fright films dating back 50 years with the grainy film adding a touch of nostalgia.

“I know that the subgenre is definitely healthy and in a thriving period, which is really exciting,” DuPée said.

With so many titles, new and old, to choose from, DuPée doesn’t hesitate when asked what his favorite is. “Black Christmas” directed by Bob Clark and released in 1974.

“It’s got everything you could possibly want,” said DuPée, noting the slasher movie’s combination of humor and darker material.

With so many hours watching yuletide terror take place on his screen, it’s no surprise that the author wouldn’t mind producing a film himself one day.

"You get so familiar with the content and the details of these things,” DuPée said. “You can’t help but be inspired.”

DuPée will spend this month on a cross-country book tour that’s leading him to Los Angeles, Philadelphia, New Jersey and Atlanta. He’ll even host a panel during one stop with actors from iconic holiday horror films.

DuPée’s love of the holiday season isn’t limited to screams and terror, though. He's just as comfortable trimming a tree as he is watching one terrorize a family.

“This time of year is always very nostalgic, and it doesn’t get any more nostalgic than the Christmas holiday season,” DuPée said. “Everything is kind of heightened during the Christmas period, but I think it really serves well with a backdrop of horror.”

DuPée’s book is available through online booksellers and in select locations. Signed and personalized copies can be purchased through his website, www.matthewdupee.com, at no extra cost.