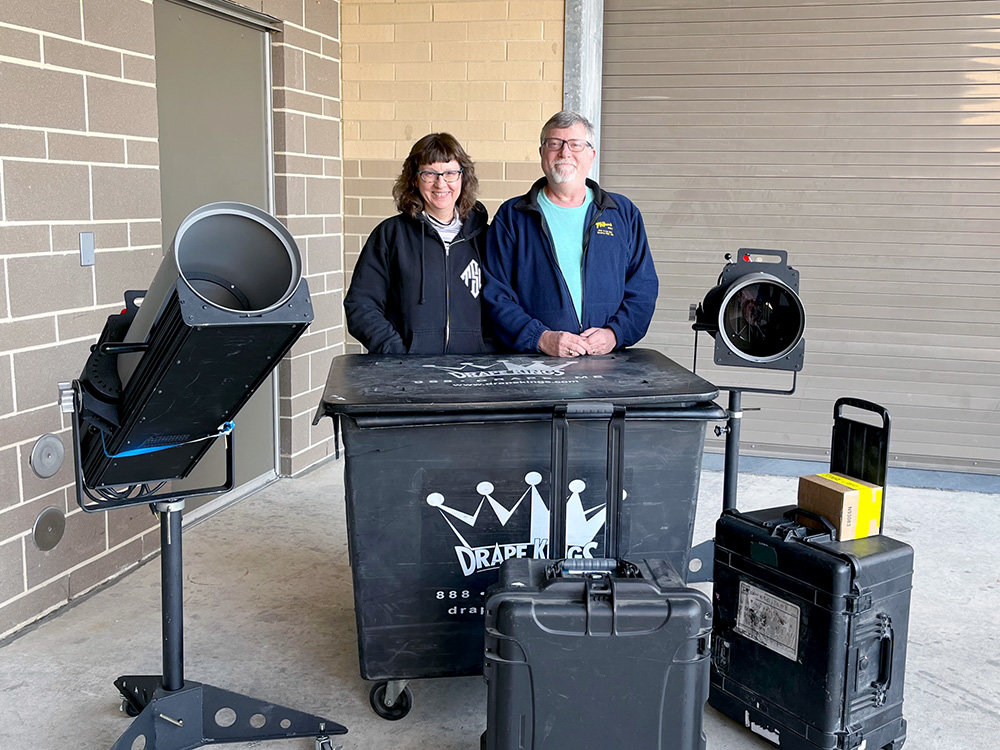 When Randy Hoffman first began volunteering for Severna Park High School’s Rock ‘N’ Roll Revival, most of the students involved in this year’s production were toddlers.

After watching his eldest son’s involvement in the show from afar, so as not to “encroach” on his school life, Randy had an itch to pitch in when his son was a freshman in 2009. Randy had his own past with technical theater. His wife Donna Hoffman joined the effort on the artistic side a few years later. They’ve been at it ever since.

“After my sons graduated, there were still children I started working with as freshmen that I wanted to keep working with and keep nurturing a little bit through another two or three years of school, and it just keeps on coming. You’re like, ‘Oh, I remember that kid; I liked working with them.’ So it just kind of becomes a continuum,” Randy said of his 13-year run.

Randy was initially drawn to help then-technical director Gary Tawes. In his capacity as a technical volunteer, Randy helped Tawes and now aids current technical directors Jenn Nicolosi and Alex Moundalexis to build the sets and teach the kids to do the same.

“I help the kids build the sets and learn how to use tools …  I guess I kind of help them come out of their shell with learning how to do things that are outside of their comfort zone. Like build things or make mistakes and overcome the mistakes and fix them,” Randy said.

“[The students] need people who believe in them. When you see them make their way through a problem, some kind of complication and they solve it themselves, it makes them feel good, and it makes us feel good seeing it … it’s important for them to have people backing them up,” Donna said.

Donna has put her lifelong crafting hobby to work on the sets, assisting with bringing the artistic vision of the show to life. One project that still sticks out in her mind was from 2016, the last year in the old auditorium. The theme was “Four Seasons,” and the artistic director wanted a wall of approximately 500 leaves in fall colors. Donna needed to find a way to get this done in a way the students would be able to implement, and fast.

“That one was honestly kind of crazy,” Donna said, but the end result was “phenomenal.”

“It was beautiful and swooshy and it looked like leaves blowing in the wind,” Randy chimed in.

These days, Randy and Donna have two familiar faces at their side as they work: their youngest son, Lukas, and his wife, Shelby.

“[Lukas] has no fear of heights, so I always lean on him to climb the ladders, climb the scaffolding or something, so when I don’t want to do that, I bring him in,” Randy said.

Severna Park High School theater director Angie Germanos nominated the Hoffmans for Volunteer of the Month, calling their help “very crucial from the past to present.”

Though the Hoffmans are reluctant to draw any attention to themselves, their pride in the show itself and the students and faculty who make it possible year after year (or shall we say, “Time After Time”) is palpable. And there is no hesitation to shine a light on the many students who work tirelessly behind the scenes to bring Rock ‘N’ Roll Revival to life.

“They’re doing the grunt work, they’re sweeping the stage, they’re cleaning the microphones,” Donna said. “They’re early to set up, they’re there after everybody else is gone, so without them the show wouldn’t happen.”

At the end of the day, the Hoffmans are fans of the show, like everyone else in the community who soaks in the opportunity to be in the room where it happens.

“There’s always some kind of stand-out aspect of the show, some incredible singer, some incredible musician, and people go to see it for those things; they want to be there when they break out,” Randy said. “We’ve seen some numbers that have given us tingles to watch.”