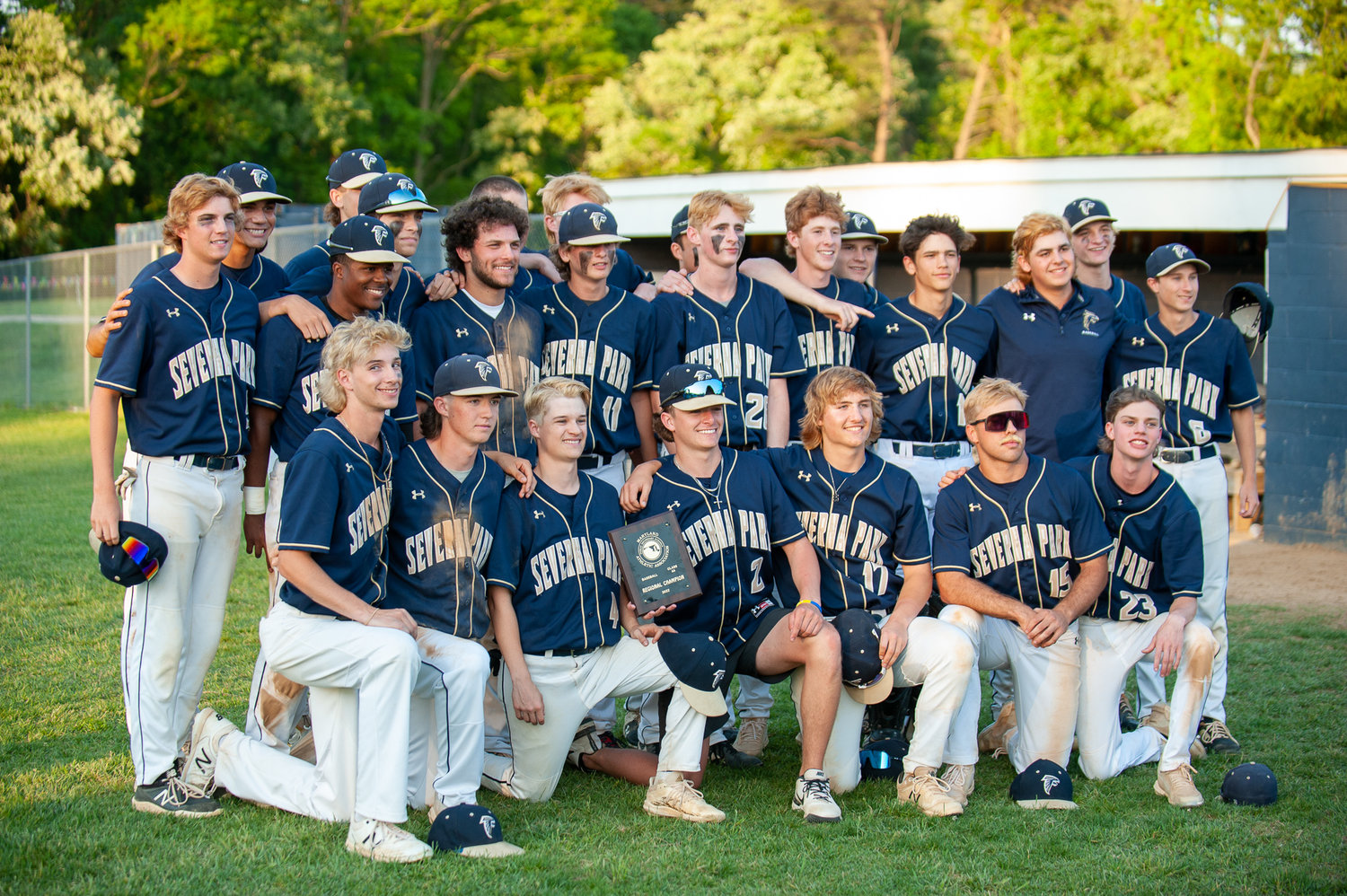 The Falcons gathered on the field after being named region champs.
Photo by Zach Sparks 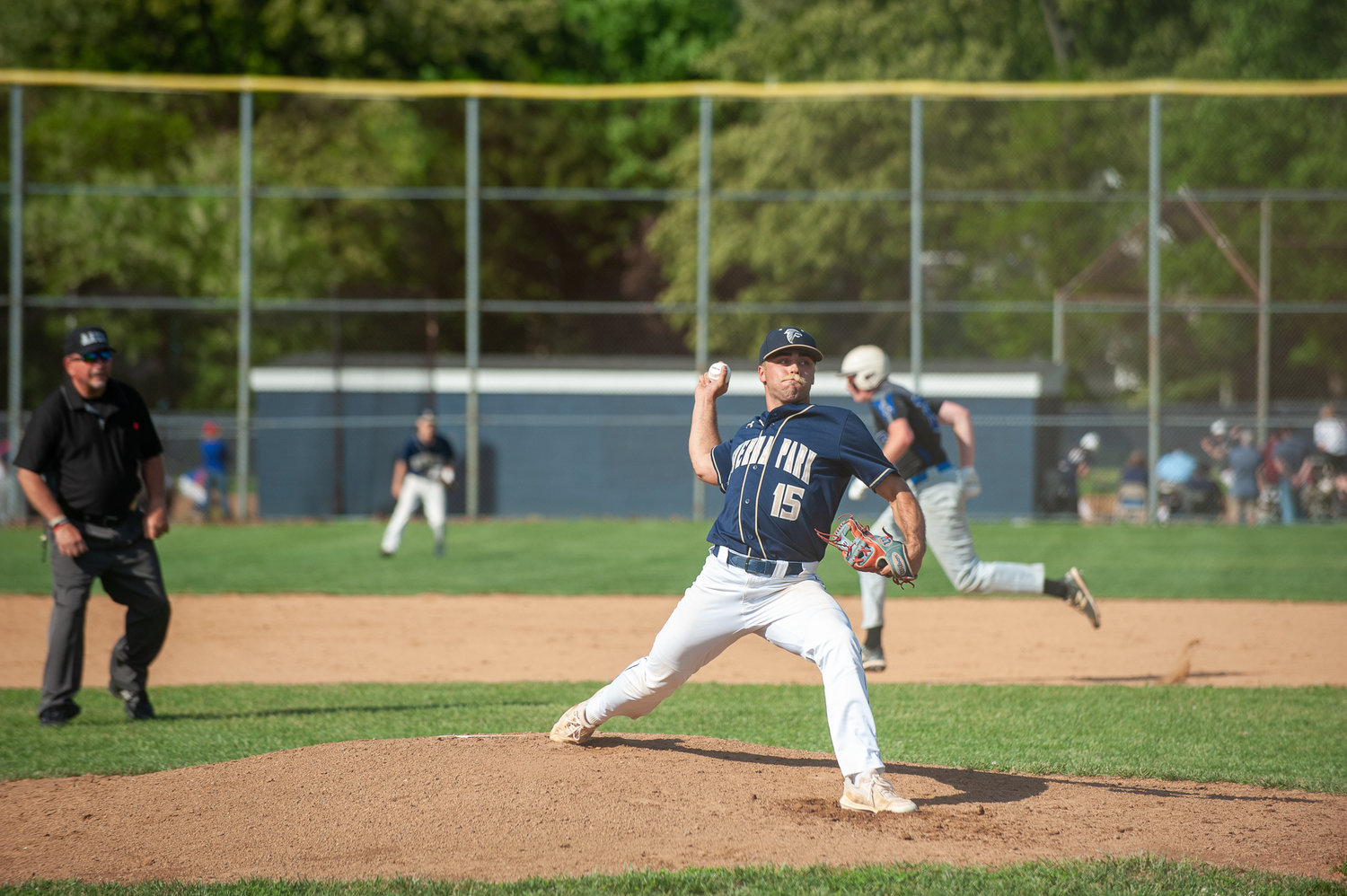 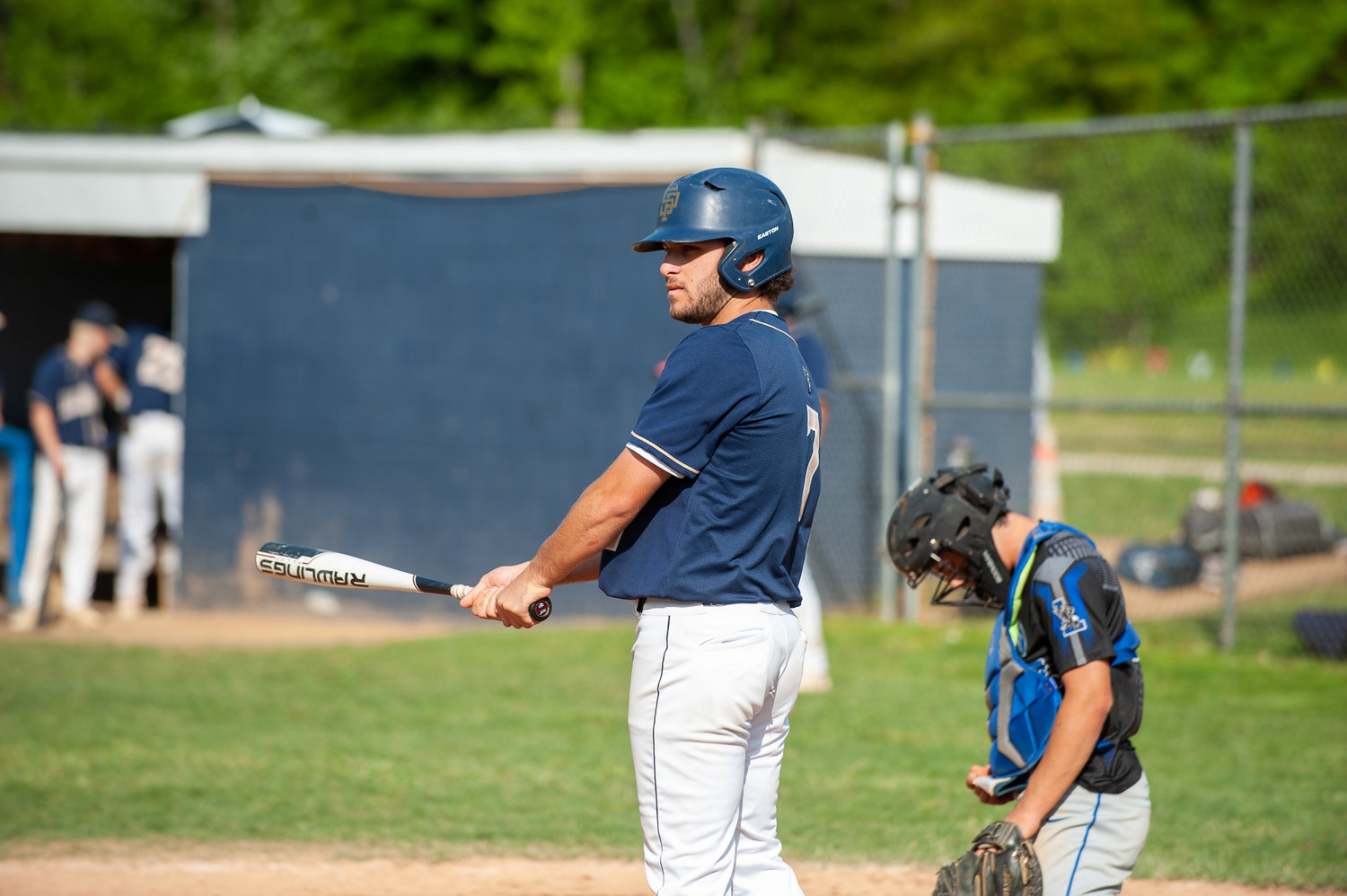 Luke Herz added a single in the fifth inning to keep Severna Park's rally going.
Photo by Zach Sparks
Previous Next
Posted Wednesday, May 18, 2022 9:29 am
By Zach Sparks

Severna Park’s varsity baseball team is no stranger to late-game heroics. Just last Saturday, James Henson III hit a walk-off single to give the Falcons a 6-5 win over South River.

The Falcons again relied on timely hitting and strong relief pitching during the region finals on Tuesday, this time beating Leonardtown 8-4.

Leonardtown struck in the first inning. A failed pickoff attempt sailed past first base and allowed a runner to sprint from first base to third. The Raiders then took a 1-0 lead on a passed ball before pitcher Seamus Patenaude struck out a Leonardtown batter to end the threat.

In the bottom of the first, Patenaude atoned for the earned run. He hit a liner into right field to tie the game 1-1.

With the game still tied in the third, Henson singled and stole a base. A sacrifice and a groundout pushed him across home plate for the 2-1 lead. Luke Herz hit a two-out single, but the inning ended with a groundout.

Leonardtown scored three runs in the top of the fourth inning, setting the stage for a Severna Park comeback. Henson reached base again and moved to third base on a Herz single. A groundball out to second base tied the game 4-4.

Herz said Severna Park was aggressive early on, giving Leonardtown’s pitcher quick innings when that aggressiveness did not pay off.

“I wanted to take the first pitch no matter what it was, make him feel like even if it’s a strike, I’m going to get ahead in the count, 2-1, and he had to throw,” Herz said. “He threw me another [fastball] and I decided to hit that one.”

Again, Patenaude had a chance for redemption. Again, he delivered. He drove a pitch into left field, where it fell in, giving Severna Park a 5-4 lead.

“We can’t take his bat out of the lineup,” Falcons head coach Eric Milton said after the game. “That was not Seamus on the mound, which was surprising, but hopefully he gets to pitch again. His bat has been a big surprise this year.”

Severna Park added some insurance in the sixth inning. After Henson reached base, Kody Phillips crushed a pitch that nearly left the park in left field. Instead, he took second base on a double. Henson scored to give the Falcons a 6-4 lead. Angel Santiago-Cruz then doubled to make the score 7-4. The Falcons would get one more run.

In the seventh, Nathan Clarke took the mound. He collected two outs, with Leonardtown earning a walk to keep their playoff hopes alive. The Raiders then hit a ball toward the middle of the infield. The ball was bobbled, but Herz stretched out to make the catch at first base and get the final out.

“Today was a struggle, but they scrapped it out and are playing well at the right time,” Milton said. “We’re in the final eight in the state, so we’ll see where it goes from here.”

The time is subject to change, but Severna Park is scheduled to play Laurel on Friday at noon in the state quarterfinals.

“We’re trying to go all the way and win it this year,” Henson said. “Can’t take another L in the state championship. I want us to get the ring this year.”

Other Comments On The Game

“As coach Milton says, we have more talent this year, but we’re young. We’re starting four sophomores, so it’s a learning experience for them, but we have the talent. Last year, we were more confident in ourselves, but I think this win gave us more confidence.”

“It’s been a little tougher this year. We’re a lot younger team and we lost a lot [of talent] after last year. We didn’t start off the way we wanted. These kids are fighters. They’re still learning and getting better every day.”

“I think they’re a close team. They have grown up together and have been playing together for a while. We have leadership at the top and then we have guys in the sophomore class that are learning from those guys.”