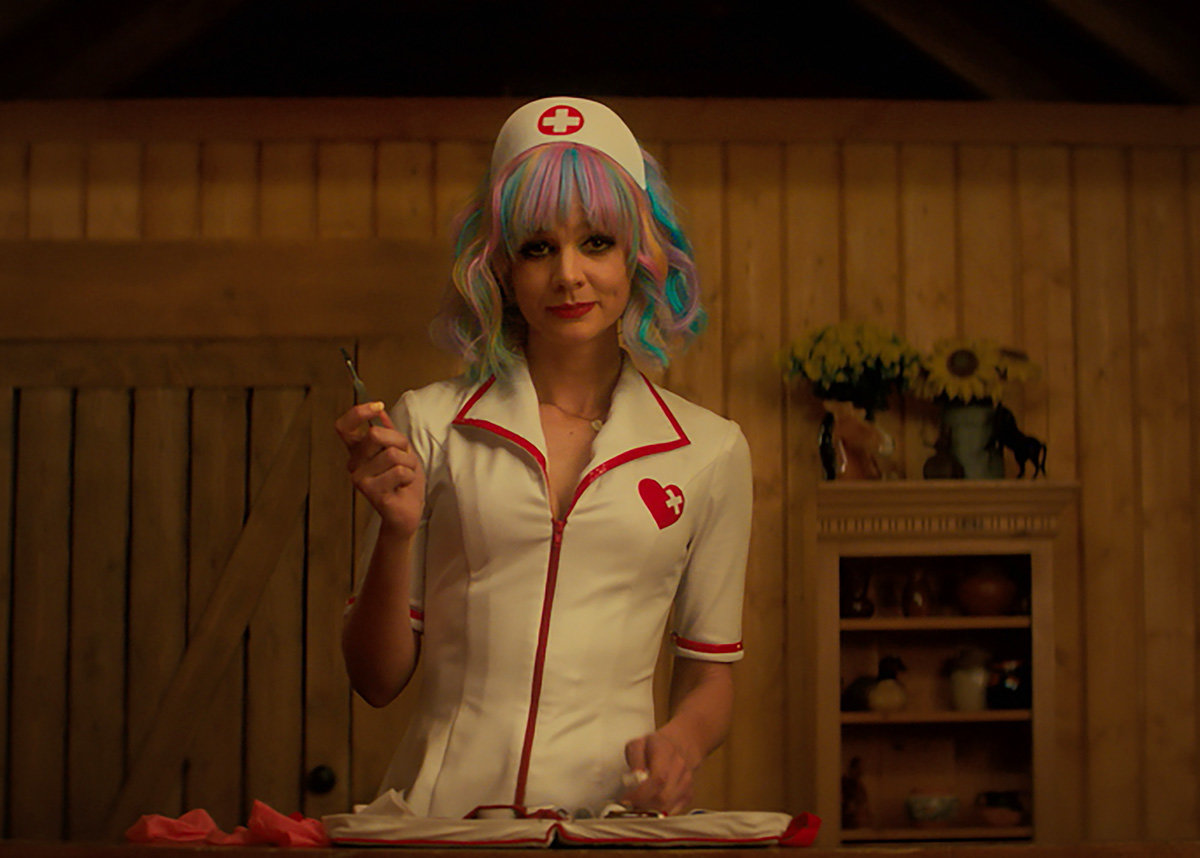 The film tells the story of Cassie (Carey Mulligan), who exacts revenge after her best friend, Nina, is assaulted while intoxicated.
Photos courtesy of Focus Features

The film tells the story of Cassie (Carey Mulligan), who exacts revenge after her best friend, Nina, is assaulted while intoxicated.
Photos courtesy of Focus Features
Previous Next
Posted Tuesday, February 9, 2021 12:30 pm
By Audrey Ruppert

TRIGGER WARNING: This review and this film deal with serious, distressing topics and will not be suitable for all viewers and readers. Please read and view with caution, particularly if you are a survivor of assault.

This was, by far, the most difficult film review I have ever had to write. This film is why trigger warnings exist. I had to pause it several times before continuing. I wish that this was a story about something that happens to only a few people. Sadly, that’s not the case. #MeToo revealed just how many women (and even men, as Terry Crews can attest) everywhere have been subject to this type of abuse. “Promising Young Woman” isn’t mere social commentary about the tangled web of complicity surrounding assault - it’s a tire iron to the windshield.

The film tells the story of Cassie (Carey Mulligan), a woman who dropped out of medical school seven years ago when her best friend, Nina, was assaulted and abused while intoxicated. It is implied that Nina ended her life as a result of the trauma she experienced. Cassie has since spent her nights exacting a kind of revenge on the unsuspecting, problematic men in her town. She goes to nightclubs, pretends to be so intoxicated she cannot stand, and is taken home by men who label themselves as “nice guys.” These “nice guys” will begin to assault her until she snaps out of the ruse, reveals she is sober and terrifies them. She forces these men, caught red-handed mid assault, to examine their moral compasses, and ask themselves whether they really are “nice guys” — at least, that seems to be the intent. Most of the men deflect the blame and insist they did nothing wrong.

Initially the film almost felt formulaic, a preaching to the choir of weary feminists. Almost every single problematic line we hear in our daily lives was trotted out for Cassie to suffer through. “Why do you wear so much makeup? Men don’t like that anyway.” “She slept around a lot, then complains when this happens? She cried wolf.” “She was drunk. What did she expect? She was asking for it.” “Why don’t you smile? No? Fine, you’re not that hot anyway.”

Part of me felt catharsis, cheering Cassie on as she exacted revenge not only on everyday “nice guys,” but on every person who was complicit in the abuse of Nina. But part of me felt incredibly sad for Cassie, and a bit concerned about the film’s message. I wasn’t sure how helpful it would be to glamorize this type of revenge, no matter how cathartic. It takes many survivors years of therapy to realize trauma is addressable. Survivors can heal, find good people, and come to terms with what has happened to them - they can reclaim what is theirs from those who took so much from them, and live a full life again. Cassie, to the dismay of her family and Nina’s mother, seems to be unable to move beyond the past. She seems trapped rather than liberated by her vigilantism. Her notebook fills endlessly with tick marks of the men she has confronted, page after page, but she is no less empty inside.

That is until she meets Ryan, a breath of fresh air who is played by Bo Burnham. If you’re familiar with Bo, you know he’s a charming, witty feminist - his off-screen persona seems to bleed into the film. You want Cassie to fall in love with Ryan. So many men claim to be “nice guys,” but Ryan is the real deal. He respects Cassie’s boundaries, moves slowly and doesn’t try to take advantage of her. Finally, Cassie seems to be healing, moving on, doing better. I thought, “Perhaps this is the director’s message - that there is hope for survivors out there, that you can move on and find peace.” But then Cassie makes a horrifying discovery.

This was where I had to pause the film. The rest of the film - even the controversial twist ending that so many critics are debating - hardly seemed to register after this sucker punch to the gut. The absolute worst fear of many survivors is the feeling that they will never love again. That the moment they show any vulnerability or trust, their trust will be abused, just as before. It’s taken so much work to realize that there are good people and good men in the world; I wasn’t sure it was helpful to tell survivors that there was no hope for healing. A cynical viewer might even remark that this film is a typical feminist diatribe about how all men are bad and none can be trusted. However, Bo Burnham’s comments on the film are instructive here. He said of the movie, “It’s not that all men are irredeemable, but it’s also saying that no men are off the hook.”

And that is where the forgiveness and healing lies: in accountability. I have had this type of crime committed against me more than once, and I have forgiven exactly one of these men: the one who apologized to me, admitted what he had done and was genuinely sorry. One of the film’s most powerful scenes is Cassie’s forgiveness of someone who defended Nina’s attacker. Not to say that all survivors must forgive - every journey is different and that is for the survivor to decide. Rather, accountability is often the beginning of healing, and more importantly, change. Sadly, accountability seems to be the quality that is hardest to come by: in many men, in society, in institutions of power.

I hope that after watching this movie, instead of feeling uncomfortable or defensive, viewers and men in particular will pledge to stop being part of the problem. To confront friends when those friends make problematic comments. To report acts of abuse they witness or know about. To support and believe survivors, no matter how drunk they were or how they were dressed when they were attacked. Only then can change happen in our society, and we desperately need it.