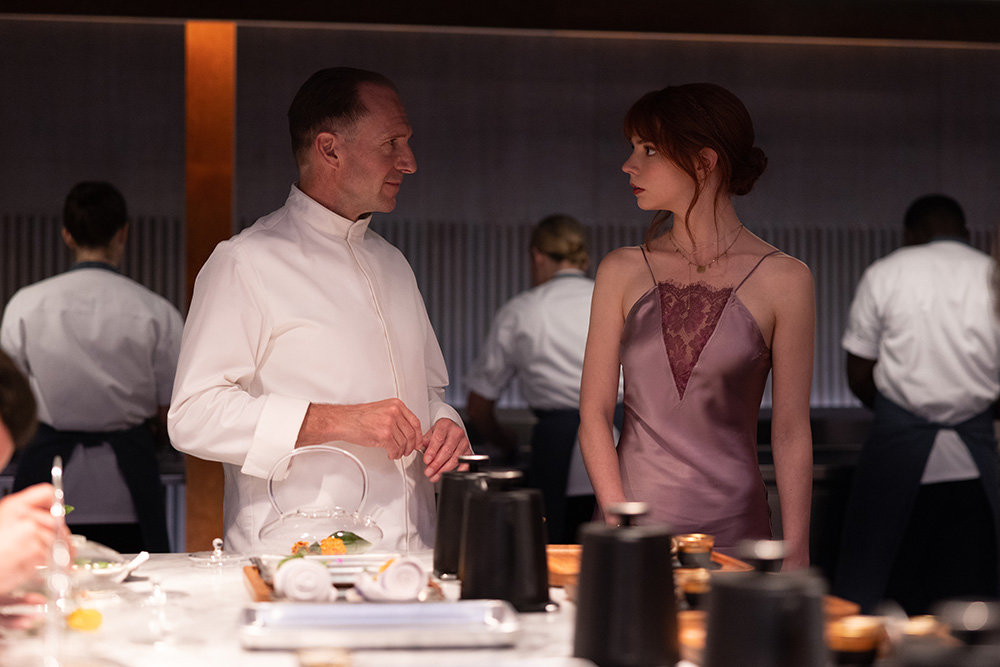 In “The Menu,” Anya Taylor-Joy (right) and her date travel to a private island to enjoy a one-of-a-kind dining experience made possible by the chef, played by Ralph Fiennes (left).
Photo courtesy of Eric Zachanowich/Searchlight Pictures 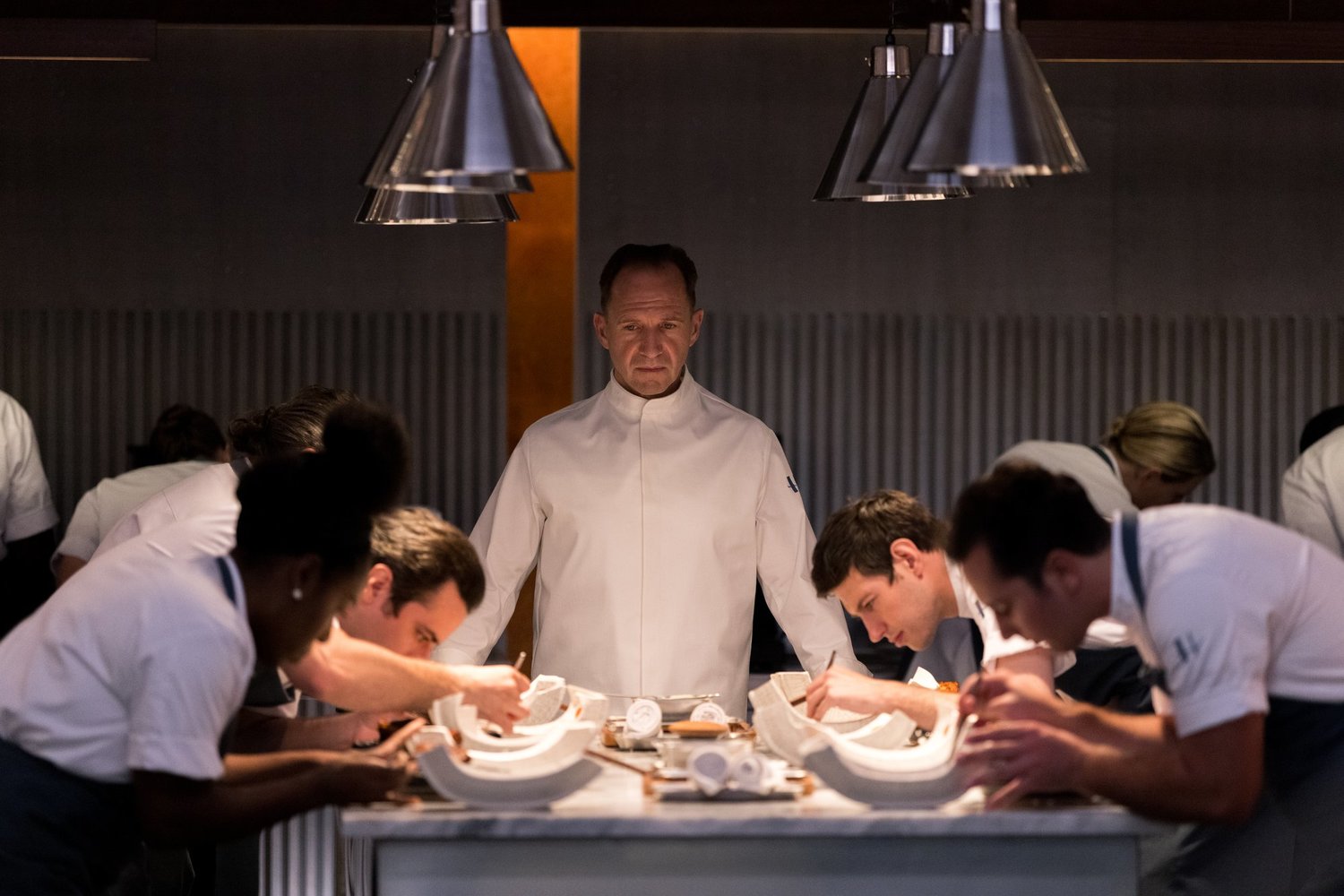 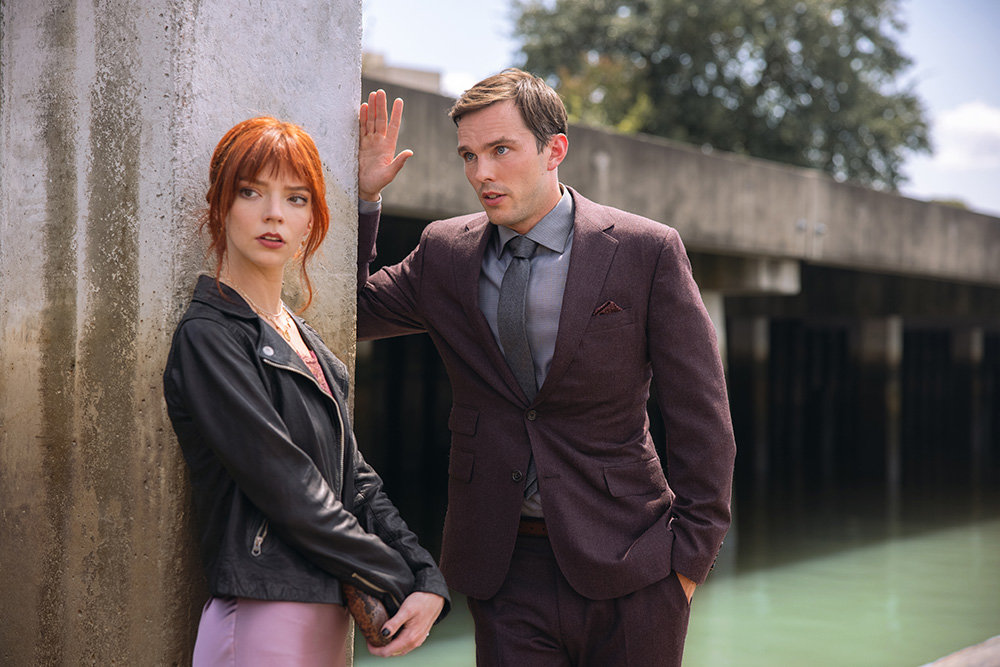 In “The Menu,” guests are promised a luxurious meal prepared by a famous chef. The experience is not, however, what it initially seems.
Photo courtesy of Searchlight Pictures
Previous Next
Posted Tuesday, December 6, 2022 11:53 am
By Audrey Ruppert

Ever been to a modern art museum and felt completely lost? You know this art is respected, venerated, famous - but it’s just scribbles on a page or blobs of clay you struggle to make sense of. “The Menu” could have been about any art form (in this case, the modality is, of course, food) but the message is universal: the parasitic, capitalist class of people who have sprung up around art - the critic, the name dropper, the “angel investor,” the obsessive devotee, the wealthy denizen who casually consumes expensive art without even appreciating it - have ruined art. They have killed the spirit and joy behind basic human creativity. Whatever happened to cooking a meal for someone because you just want them to enjoy it? Is calling a teaspoon of sea foam an “amuse-bouche” really necessary?

The film is hard to describe without giving too much away, but the basic premise is that “foodie” Tyler (Nicholas Hoult) takes his date, Margot (Anya Taylor-Joy), to a private island where they enjoy a one-of-a-kind elite dining experience and luxurious meal prepared by a famous chef. The night is not, however, what it initially seems. I would classify this film as a thriller with its unexpected twists and turns. “The Menu” is an excellent character study, with each guest representing a different type of insufferable denizen found at elite restaurants.

Some would call the film as pretentious as the people it is criticizing, but never have I seen a film so aware of itself. Each line is as carefully crafted as the dishes served - a perfect balance of seriousness and self-deprecation. Don’t feel turned off by the culinary terminology - this film is not for the consumers it studies, the people eating and spending $1,250 per head on a dining experience. It is for the pure enjoyment of the everyman who finds these people ridiculous, unethical, or pitiable. It is a witty, biting black comedy and the entire cinema erupted into laughter multiple times throughout my visit.

Anya Taylor-Joy’s acting is incredible as always, and she plays her character well. She represents those among us who’ve worked in the service industry, those of us who have brushed shoulders with the wealthy and elite through serving them but know we’ll never be one of them - even if we eventually manage to wear the right clothes and sit at the right table.

For my birthday this year, my partner took me to a world-famous restaurant, The Gordon Ramsay, in London. I had a panic attack in the first 15 minutes of the meal, which I just about managed to conceal. With a dozen waiters, the maître d’ and the sommelier all fussing over me and serving a dozen tiny dishes with ingredients I had never heard the name of (and I love to cook), I had never felt so uncomfortable. I had interacted with the characters in this intimate dining room all my life. I had tutored their children, just about managed to go to school with some of them, served them shots off trays in Chelsea nightclubs and poured them expensive wine in French brasseries. And yet I knew so acutely I did not belong there, that I was wrongly dressed, and I felt like everyone was looking at me, the way everyone looks at Margot in the film - why was she there? It took me a few minutes to realize I was being silly and that these people were no better than I was - something Margot recognizes right away.

The film is a character study of the consumers, but it’s also a study of service workers. There are the survivalists, like Margot and myself. There is the ambitious, like the chef (Ralph Fiennes, who is top-notch in this film by the way). There are the people who seek validation and acclaim from great chefs, from food critics, from celebrity customers, but never quite find what they’re looking for. There are the people who used to love their craft, but after years of obsession have forgotten why they got into the industry in the first place.

I’m aware I’m part of the problem, as a film critic. Maybe the Marvel films aren’t so bad after all - don’t people enjoy them? I say, enjoy “The Menu” - even if you’re not here for the social commentary, it is extremely funny and the twists are unexpected. The acting is strong throughout and none of the characters are cardboard placeholders - you will find yourself invested in each of their stories. You’ll spend most of the film guessing what the maniacal chef’s game is, and the payoff is both hilarious and rewarding. One of the cleverest films I’ve ever seen.