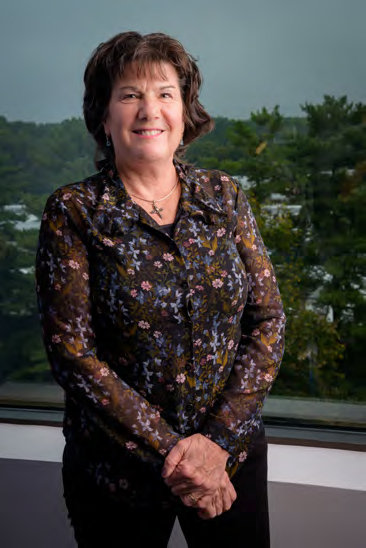 Severna Park resident Janice Keating was recognized with the Community Foundation of Anne Arundel County’s (CFAAC) Boots on the Ground Award during a virtual awards ceremony in November.

The award is presented to an individual who has gone above and beyond to meet the community’s needs, serving the most vulnerable and underserved.

“Janice Keating has the uncanny ability to be everywhere she needs to be, for everyone who needs her,” said Mary Spencer, president and CEO of CFAAC. “This inexhaustible volunteer has worked with the Girl Scouts, Mission of Peace, Catholic Charities, Downtown Hope Annapolis, the Food Bridge in Anne Arundel County, and Anne Arundel County Public Schools. Janice’s reach extends beyond our county to the streets of Baltimore and Appalachia.”

Keating was nominated by CFAAC board member Martha Van Woerkom, who said Keating is humble and never asks for accolades.

“I wanted Janice to be recognized because she’s a behind-the-scenes person,” Van Woerkom said. “She does so much, and she’s made it a lifelong commitment to do all these things for people in our community.”

Five years ago, Keating began volunteering with Downtown Hope Church, a ministry in Annapolis that closely aligned with her values and philosophy of giving back to the Annapolis community. When Love Annapolis, an outreach organization was formed, she became its director and developed positive relationships with the children and families living in public housing communities like Newtowne 20, Woodside Gardens, and Robinwood. She worked closely with community leaders to establish credibility and make impactful change, offering homework help, and organizing community dinners, holiday celebrations and summer camps.

Todd Smith, an elder at Downtown Hope in Annapolis, recalled, “When demolition of Newtowne 20 began and residents had to move out of their homes, Janice was there for them. She helped connect residents with advocates to make sure they understood their options and to assist with finding alternative housing.”

Through Love Annapolis, Keating became involved with the Benevolence Team, a coalition of local nonprofits that work closely with Title 1 schools in Anne Arundel County, to identify and help families in need by offering a temporary helping hand with utilities, rent, medical expenses, etc.

“I think the thing that I enjoy about volunteering most is just being with people,” Keating said. “So, whenever I am with people who are in need, it just makes me happy to be able to lead them to a place that will help their situation.”

When COVID-19 hit, Keating assisted the local Hispanic community by partnering with Center of Help and Our Lady of Guadalupe Ministries to organize weekly deliveries of clothing, food and baby essentials to 300 to 400 families in Allen Apartments. The operation was subsequently moved to the Evangelical Presbyterian Church and named West Annapolis Pantry, where it continues to serve 200 to 260 families every two weeks. Keating’s reach extends beyond Anne Arundel County.

“She weaves herself into the fabric of many communities,” said Smith, who described Keating as selfless.

Selfless. Compassionate. Humble. These are all adjectives used to describe Keating.

“Janice serves because Janice loves,” Van Woerkom said. “She has that rare quality of making people feel seen and valued.

“Janice doesn’t just come in for a weekend or volunteer a couple hours,” Van Woerkom added. “Janice stays and she works with the organization for years. She gets to know them. She truly wants to make change.”

Keating has made a direct, tangible impact on her neighbors. In addition to the aforementioned organizations, Keating has worked with the Girl Scouts; Giving Back, Linda’s Legacy; Benevolent Baskets of Catholic Charities; Patty Lee’s “Angels of Addiction” and the Franciscan Center. As if that list isn’t extensive enough, for the last 12 years she has worked as a home hospital teacher for Anne Arundel County Public Schools, teaching high schoolers who are unable to go to school because of surgery, cancer, addiction and other reasons.

“This is our community, and these people are struggling, and this is making a difference for the people who live just a couple miles away from us,” Keating said.